There are 17,811 square miles combined in Hill, Blaine, Chouteau, Liberty and Phillips counties. When driving those miles, the windshield splits into two colors: Montana’s Big Sky blue and the shade of gold found only during grain harvest in August. Both seem to stretch on in infinity.

Montana’s Hi-Line —  its namesake the railroad, the northernmost line in the region —  may well be a country of its own, far apart from Montana’s busiest cities. Field hawks atop telephone poles survey the highways. County roads are home to the disappearing western tradition of the one-finger steering wheel greeting. Directions are given in terms of mile markers, where gravel roads bend and fork and where cellphone service is as uneven as the washboard beneath the tires.

There are little towns like Box Elder, Zurich, Gildford, Turner, Hingham, Joplin and Rudyard, bookended by grain silos and signs counting double-digit populations, reminding passersby that Montana is nothing if not a patchwork of rurality.
Yet, out here, in the stunning remoteness of central Montana’s agricultural backyard, there’s a connection to Montana State University that weaves through it all.

Her name is Peggy Lamb.

Lamb is a 16-year employee with the Northern Agricultural Research Center in Havre, part of MSU’s College of Agriculture and Montana Agricultural Experiment Station. In that time, as an agronomist, she has driven thousands of miles to and from research plots for maintenance, to present the latest research at field days and to problem-solve on farms. Her work has composed a deep collage of engagement with farmers, students and community members who live and work in Montana’s north-central cereal grain capital.

That work has earned her a long list of supporters. Her fans include multigenerational farmers from five counties, who regularly call and text her cellphone with questions spanning the gamut of production agriculture —  and then there are the farmers who got Lamb’s number from another farmer who said she could help. They also include the students for whom Lamb’s mentorship has meant a great deal professionally and personally along with seasonal NARC workers who are saved from Havre’s legendary temperatures during the winter cattle drive by way of Lamb’s hot coffee and homemade breakfast burritos.

“She’ll do anything that’s needed to get the job done, no matter how far the drive is or what she has going on,” said Max Cederberg, who farms with his wife, Kirsti, on the Hot Rod Ranch in Turner, 73 miles northeast of Havre. The Cederbergs host an off-station research site that includes durum, spring wheat and winter wheat varieties that Lamb oversees. Off-station research trials are MSU-managed test sites on private farmland that include crop variety trials of varying soil, climate and elevation conditions around Montana. “She’s really committed to it all, to the research, the relationships.”

Lamb knows that farming is a 24-hour job. She is the daughter of Idaho farmers who grew dry beans, sugar beets, oats, alfalfa, wheat and other small grains near New Plymouth. She grew up in the economic downturn of the 1980s and watched her mom hold a second job to make ends meet. The younger of two daughters, she spent most of her free hours helping her parents on the irrigated farm.

She found track and field in high school. Her performance in the high hurdles and the 300-meter hurdles earned her an athletic scholarship to Blue Mountain Community College in Pendleton, Oregon. Following two years at BMCC, Lamb then attended the University of Idaho in Moscow where she gravitated toward work that allowed her to apply what she knows best: quietly working hard for farmers. She picked up work first cleaning seed for the winter wheat breeding program and then in entomology compiling data and assisting with crop insect pest management research.

Lamb was encouraged to enroll in graduate school at the university and graduated in 1998 with a master’s degree in plant science.

“I didn’t want to go on to a doctoral program because I was genuinely interested in the field work,” she said. “I didn’t want to have be writing grants and paying someone else to do what I knew and loved.”

After graduate school, Lamb joined MSU’s Southern Agricultural Research Center in Huntley in 1999 as a research associate. She spent three years there working with the research center agronomist and supporting crop variety testing and development before transferring to NARC.

Last summer, the Havre Chamber of Commerce recognized her as an outstanding agricultural advocate, calling her “a quiet titan” in Montana’s agricultural community.

“Peggy’s the one in the back of the room in meetings, but you know she’s soaking it all in,” said Lochiel Edwards, a grain producer in Big Sandy and currently in his 55th year in the harvest field.

That’s because Lamb is a “farmer at heart” and “she does the work” when it comes to MSU’s agricultural research advancements for Montana, Edwards said.

“Agriculture doesn’t work with people who won’t execute,” Edwards said. “Peggy executes the ideas behind the research. She’s the one who’s making sure the fields are kept clean and the data is documented. . . Everyone trusts the results that are Peggy’s. The world needs (a) bunch more of those people.”

“She always takes the time, no matter how busy she is, to answer your question and make sure that you understand,” Clark said. “She’s an incredible teacher and person in a lot of different ways. You just know that she’s either teaching, listening or doing something that’s for the betterment of either the system, the crop, or the person.”

Landolfi, who worked as a summer employee at NARC, said Lamb’s mentorship —  a “mix of toughness and niceness” —  allowed her to appreciate and understand “how research on a farm actually correlates with production.”

Landolfi said Lamb is a person who “doesn’t demand respect, but earns it” in the ways she mentors employees, works alongside farmers and delivers the most accurate information and data when needed. 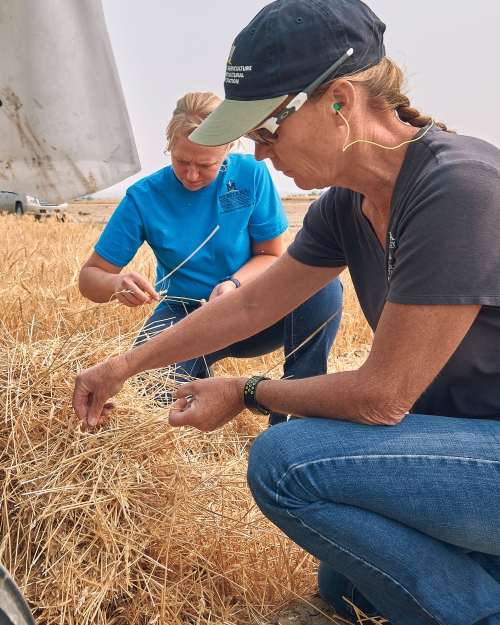 “She helped me build a strong work ethic, especially in building efficiency and effectiveness,” Landolfi said. “I learned more than anything that time is essential in this profession; you just have a small window of advantage to get it done. I’ve definitely taken those skills with me since then.”

Last year, Lamb won the university’s two employee awards: the Pure Gold award for contributions to the university community and an Employee of the Year Award in the area of competence. Letters of nomination supporting her said Lamb’s trademark calmness and training expertise in everything from operating a combine to seed cleaning is well known.

Despite the awards, Lamb would rather her work speak for itself.

“I get to do what I like to do,” Lamb said. “I get to work in production agriculture, be in the field and conduct research that has the potential to help a lot of producers.” •